How continuous monitoring and control of granulate PSD can be achieved 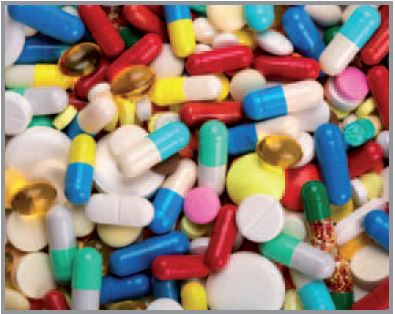 Granules are the basis of numerous products in the pharmaceutical and food sectors; they are subject to the strictest quality requirements.

Not all processes in the chemical and life science industries can be efficiently tested on a continuous basis. Especially in the area of dry granulation, in-process control is treated more as an afterthought. Although experience from the industry shows that continuous monitoring of a process in real time is not only economical, but also increases the quality of the end product. A new solution for continuous dry granulation has been developed by Alexanderwerk GmbH and Parsum GmbH in a recently completed joint research project.

The production of granules as a basis for chemical or pharmaceutical products is often carried out in a discontinuous batch process. In the pharmaceutical industry in particular, this procedure is also transferred to roller compactors to ensure the traceability of a production batch. At the same time, this means a lot of additional work for such companies. “The equipment has to be dismantled, cleaned and reassembled after every batch that has been processed,” explains Marcus Weidemann, process technology engineer at Alexanderwerk GmbH. “This increases the downtime of the machines and subsequently leads to an increase in production costs.” In addition, employees have to manually take random samples several times per batch and analyze them in the laboratory. Since the results are usually available after the completion of a production cycle, process parameters can only be adjusted for the following batch if quality defects are detected, while in many cases the quantity already produced has to be completely discarded.

Continuous granulate control can be economical and better for the environment

Improved process controls not only ensure an increase in the quality of the product, they also make it possible to detect defects at an early stage and thus avoid unnecessary costs. What is often forgotten, however, is that fewer rejects and more efficient processes always mean “material-saving” and thus “environmentally friendly” at the same time. Modern analysis options in real time are part of one of the twelve principles of Green Chemistry.

In order to design the process technology of the roller compactors with the corresponding measuring instruments and the associated control technology for continuous manufacturing, Parsum and Alexanderwerk worked out a solution in a joint development project. This is because the continuous manufacturing approach offers numerous advantages over the batch process: “Ideally, the measuring technology used not only monitors Critical Quality Attributes (CGA) in real time, but also provides the actual values in order to automatically counteract any deviations,” explains Stefan Dietrich, Managing Director of Parsum GmbH. “As a result, production no longer has to be interrupted to readjust parameters. Plant availability as well as close tolerance quality control is significantly increased, which both improves product quality and reduces manufacturing costs.”

From laboratory analysis to in-process measurements

The practical implementation of a Process Analytical Technology (PAT) process presented a major challenge in dry granulation. This is because while machine-side process parameters, such as the speed of the feed screw, the roll speed and the roll press force, can already be recorded online. Checking the particle size distribution, an important process variable for the processed material, was previously only possible offline. The reason for this was the lack of a suitable combination of sampling equipment (process interface) and measurement technology for this process. “In brief, in a roller compactor the very loose, powdery starting material is first compacted by mechanical force between two counter-rotating rollers to form a continuous solid ribbon, also called, flake. Subsequently, this is gently milled in a screen mill called a Rotor Fines Granulator (RFG), resulting in granules with a defined particle size distribution as the end product,” Weidemann explains. The challenge in measurement is that the granules produced do not consist of homogeneous particles, but of particles with size ranges from very fine to coarse within a given sample.

Relevant for the measurements are the two resulting fractions: the fines fraction and the granular fraction. “This is a bimodal distribution of the particle size,” reports Dietrich. In the past, various measuring probes and dispersers had been tested that had already proven their worth in other granulation processes, for example in fluid bed or high-shear granulation. In the special case of the dry granulation process, however, the in-process measurement results often differed significantly from those of the samples analyzed offline in the laboratory.

Parsum and Alexanderwerk finally took a closer look at the causes of the fluctuating measurement results as part of a joint research project. Based on these investigations, a measuring probe and a process interface to the roll compactor had to be developed. For a fundamental process simulation of roller compaction, they also called on the expertise of the Technical University of Hamburg (TUHH).

The project partners identified the Particle Size Distribution (PSD) of the granules as the most important critical quality attribute. Parsum’s task was therefore to develop an instrument for in-process measurement that would determine the PSD representatively and in real time, without major intervention in the process or machine design. In order to obtain meaningful data as a basis for process control, a suitable “process interface” for the Parsum probe had to be developed. Furthermore, it was important to extend the previous standard measuring range downwards so that the fines fraction can also be measured accurately.

The measurement location is decisive

For the illustration of process changes, it is important to carry out a differentiated evaluation of the measured data. It is not sufficient to look only at the median particle size (x50), as in other processes with “normal” PSD. Instead, the ratio of fines and granular fractions is decisive in this process. “In regular operation, however, this ratio fluctuates,” Dietrich explains. “The fines fraction passes unevenly through the outlet of the machine and in this way leads to measurement fluctuations.” The positioning of the measuring probe is therefore particularly important for representative sampling.  There are striking differences in the ratio between fines and granule content depending on where and how it is positioned below the granulation screen. In order to develop an optimized method for a sample that is as representative as possible, four different approaches were tested. For this purpose, among other things, several test series were carried out in which samples were taken simultaneously at 40 different positions under the granulating screen which were then analyzed. A patent application was filed in early 2021 for the resulting method of representative in-process sampling.

The small particle size also posed a challenge. In order to enable continuous in-process monitoring, Parsum developed a PAT measuring probe with a lower measuring range especially for use in roller compactors, as well as special in-process dispersers with which particles in the size range of 20 – 2000 µm can also be reliably and consistently distinguished and measured. 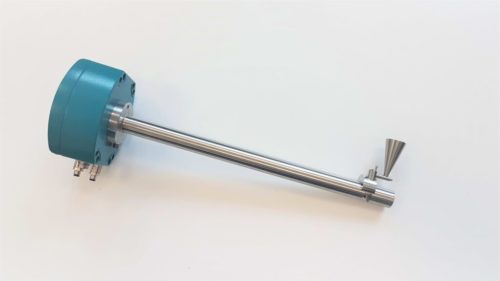 The in-process particle probe has a newly developed process interface for representative measurement. Manual random samples no longer have to be taken and analyzed offline for quality assurance, but all measurements and analyses can already be carried out in-process and in real time. (Image: Parsum GmbH)

On the basis of numerous test series and optimizations in measurement technology, it was finally possible to develop a market-ready roller compactor for dry granulation with an integrated PSD diagnostic tool. The particle measuring probe was placed in a strategically favorable location in the roller compactor so that manual random samples no longer have to be taken and analyzed offline for quality assurance, but all measurements and analyses can be carried out in-process and in real time. Nevertheless, Alexanderwerk GmbH paid attention to a space-saving design during integration, so that the roller compactor does not increase in size compared to previous models. Only 100 mm more overall height is required at the outlet of the roller compactor to install the PSD measuring probe with dispersion technology.

All relevant machine parameters, such as press force, roller gap, and roller speed, are combined in the machine control system and the actual and target values are recorded and compared. In addition, the complete PSD is now also measured and recorded. The characteristic values are both graphically processed in real time and stored in the batch log,” reports Weidemann. Thanks to this online monitoring process, the manufacturing process can be stopped at an early stage in the event of major deviations, or if predefined limit values are exceeded.  This prevents unnecessary and costly material losses. In addition, the in-process measurement data can be used for direct release of a produced batch for the next processing step. 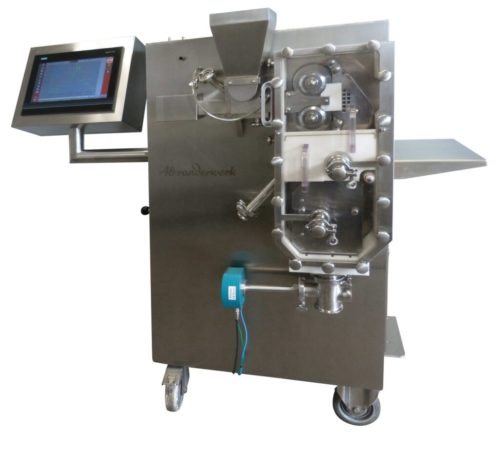 Based on numerous test series and optimizations in measurement technology, a market-ready roller compactor for dry granulation with integrated diagnostic tool has been developed. (Image: Alexanderwerk GmbH)

Following completion of the first phase of the research project, a market-ready solution has now been developed which can be offered as an option for the WP120 Pharma roller compactor from Alexanderwerk GmbH and is also to be adapted for other areas of application. For the project collaboration partners, however, the project is not yet complete. The success development of the roller compactor with in-process PSD measuring probe is getting the industry one step closer to a fully controlled continuous manufacturing process. Many more up- and down-stream process challenges still need further consideration. An evaluation in real time of the PSD measured in-process is already planned in order to draw conclusions about the ribbon density. Such an evaluation can intervene – if necessary – in the compacting process via a control loop. Therefore, an even more consistent granule quality could be produced. “Industry 4.0 is finding its way more and more into process technology, allowing continuous, cost-efficient, and error-free production,” concludes Weidemann.

This website uses cookies to improve your experience while you navigate through the website. Out of these cookies, the cookies that are categorized as necessary are stored on your browser as they are essential for the working of basic functionalities of the website. We also use third-party cookies that help us analyze and understand how you use this website. These cookies will be stored in your browser only with your consent. You also have the option to opt-out of these cookies. But opting out of some of these cookies may have an effect on your browsing experience.
Necessary Always Enabled
Necessary cookies are absolutely essential for the website to function properly. This category only includes cookies that ensures basic functionalities and security features of the website. These cookies do not store any personal information.
Non-necessary
Any cookies that may not be particularly necessary for the website to function and is used specifically to collect user personal data via analytics, ads, other embedded contents are termed as non-necessary cookies. It is mandatory to procure user consent prior to running these cookies on your website.
SAVE & ACCEPT